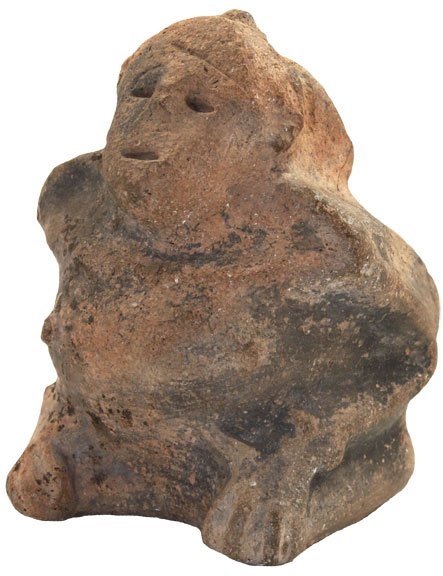 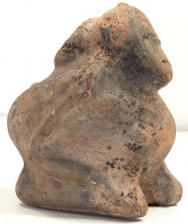 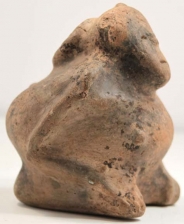 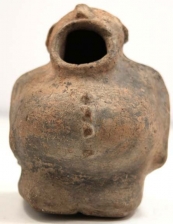 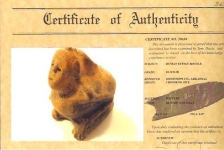 5 1/4” Full Body Human Effigy Bottle. Crosskno Site, AR. Solid. Classic Mask Face Design. Pictured on back cover of the Relic List (#75). Solid. Davis G10 COA.
This is a kneeling human effigy hooded waterbottle reportedly from the
Crosskno Site in Mississippi Co, AR. The Crosskno Site is known for
producing a wide variety of human effigy styles. This particular bottle
depicts a full bodied human wearing a mask, typically referred to as a
"death mask" by collectors. This bottle shows a human with undefined gender
(although the vast percentage of human effigies are female, since this one
does not have depicted breasts and because it is wearing a mask, I would
guess that this one is male). It has appliqued collar bones, arms, and
hands on the knees. The person is sitting on legs folded back under the
body with feet folded inwards, which is typical of Mississippian human
effigies. The bottle shows a small row of spinal protrusions representing
the typical "hunchback style" human effigy. These effigies were once
thought to represent shamans or medicine men/women and the spinal protrusion
was thought to show an actual deformity seen among the Mississippians.
However, this deformity has never been found in Mississippian burials in
enough frequency to justify the commonality of this feature in Mississippian
human effigy pottery. The majority of the female effigies were thought to
be depicted as being pregnant. Current thought is that these effigies
represent "The Old Woman that Never Dies" Mississippian deity, (what we
might think of as a "Mother Nature" figure) and not an actual person in the
tribe. However in this particular case, due to the undefined gender,
slimmer body and addition of a mask, this example may not represent the
typical deity seen in most human effigies and may actually represent a
shaman from the tribe 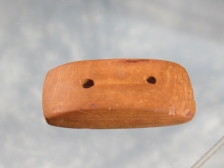 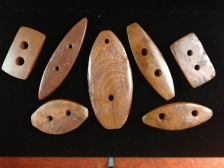 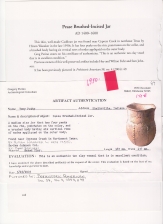 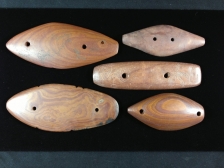 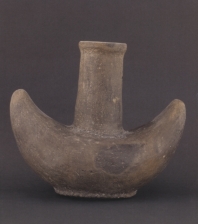 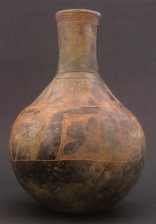 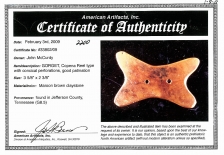 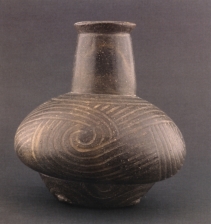