Several quality Wilson points have been found in Bastrop County, several near the Hogeye Clovis Cache Site. My first thought was that this was a Scottsbluff, but not according to the Rogers COA. The base is gound and the tip is rounded, not broken. For those that don't know, the Wilson Leonard Site, from which the Wilson point was named, had a layer of Wilson points immediately above an extinct Bison bone bed from the Folsom Culture. On top of the 9 Wilson points was a layer of Paleo points including, Scottsbluff, Golondrina, Barber, Angostura, and St. Mary's Hall. This site moved the date for notched points in Texas back by about 2500 years. But, perhaps most important showed that Lanceolate cultures lived at the same time as other cultures that started making notched points. I have the shipping. 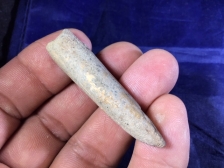